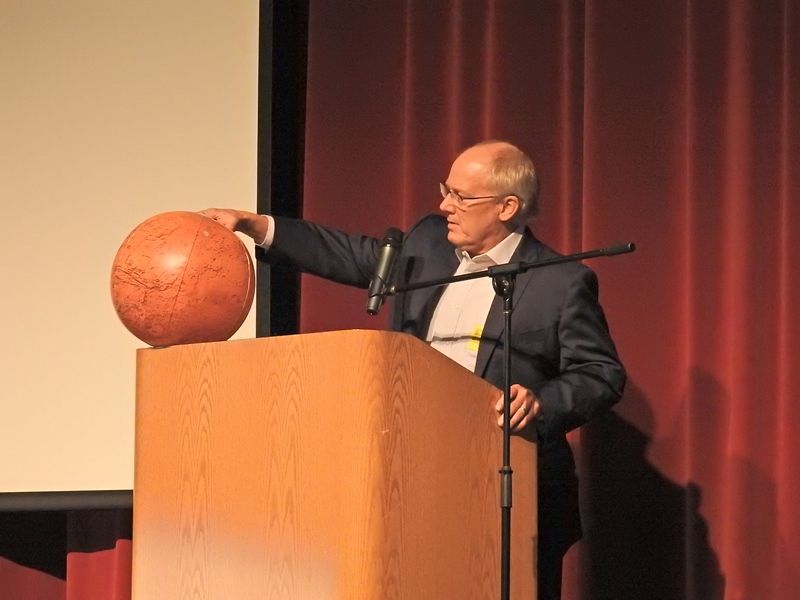 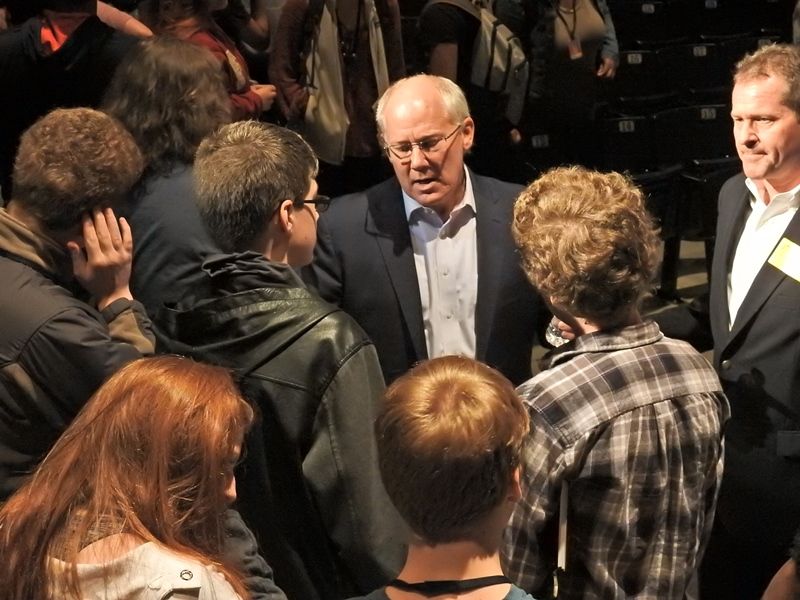 Two schools will receive Mars Maps that are 25 by 25 feet, and three schools will receive maps that are 15 by 15 feet. The map depicts the Mars Orbital Laser Altimeter (MOLA) image, which measures the elevation of the surface features of Mars, and it includes the landing locations of NASA Mars robots. The maps can be used to cover topics that include map reading, latitude/longitude comprehension, topographical map comprehension, mission planning, spatial awareness, scale models and other Mars-related lessons. 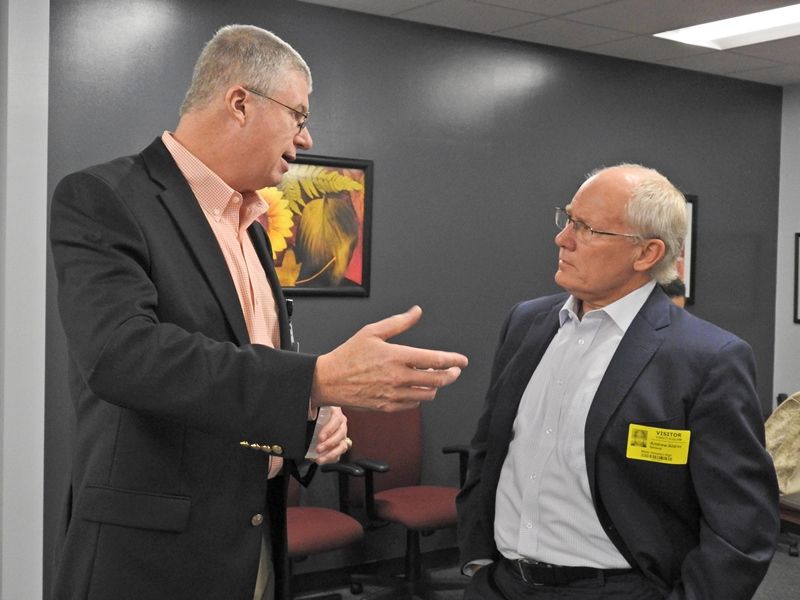 During the assembly at Wade Hampton High, Dr. Aldrin told students, “The thing that matters most to my father, Buzz Aldrin, is putting people on Mars to stay. One thing we need to understand about going to Mars is, it is not just about building habitats and life support systems, but it is about building the technologies that allow people to work together.”  He added, “I promise you that at least five or six of you will play a critical role in putting the first humans on Mars by doing the technical work, medical work, and problem solving that will be necessary to make it happen.” 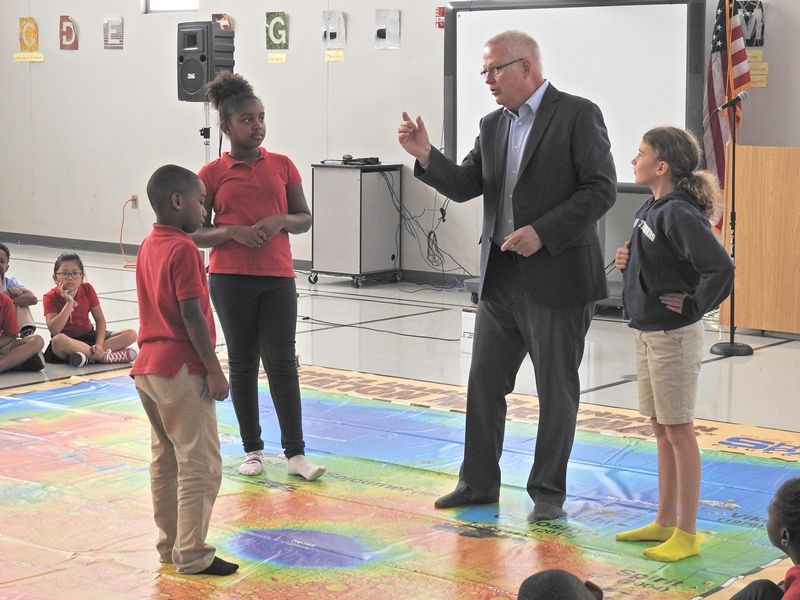 “It is exciting to me that one day one of you will walk on Mars,” said Superintendent Burke Royster.. “It will require the work and effort of your generation to lead the way and to develop the means, the methods, and the manner that will allow someone to walk on Mars. With the donation of these maps, we have been given a great opportunity to be part of the vision of Buzz Aldrin’s Foundation and to be part of the future exploration of space.” 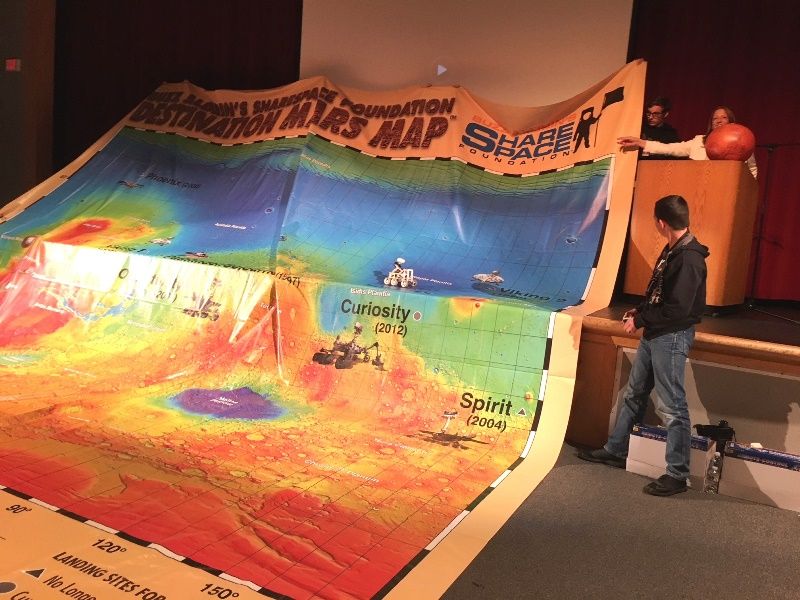 The Giant Mars Map Curriculum, provided by Buzz Aldrin’s ShareSpace Foundation and Purdue University, is a problem-based curriculum unit designed to provide students the opportunity to explore Mars through a combination of children’s literature and engaging real-world lessons. The curriculum includes surviving on Mars, Landing on Mars, The Mars Expedition, Learning from Experience, and Occupying Mars.

Using the maps, students will work in collaborative teams to complete the integrated series of research and challenges. Lessons are designed to improve student STEAM content knowledge and 21st Century learning skills. 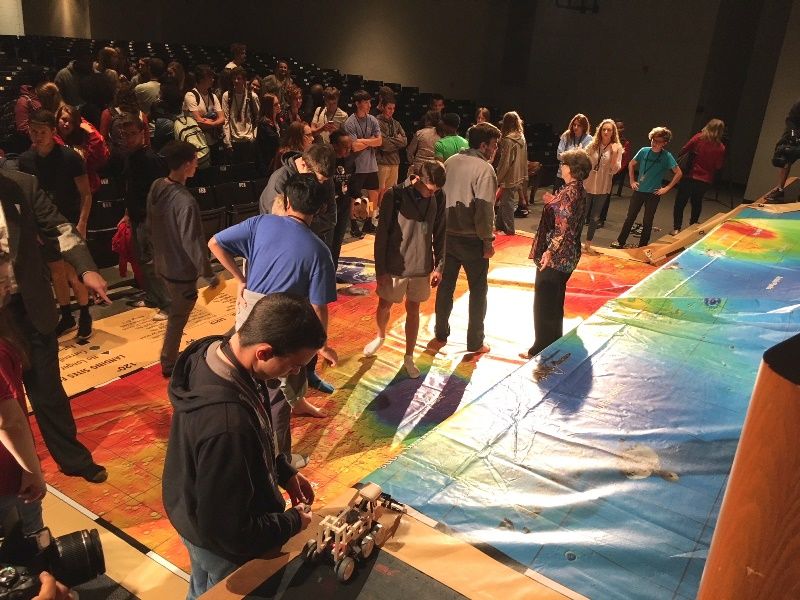 Beth Leavitt, physics teacher at Wade Hampton High School, and Dr. John Kaup, director of Science Education for Furman University, were instrumental in bringing the Mars Maps to Greenville. Mrs. Leavitt was honored as the 2017 Space Educator of the Year by the National Space Club. She worked for 12 years as a biochemist before deciding to become a teacher. She is director of the WHHS FIRST Robotics Team, a part-time employee at Roper Mountain Science Center, and has participated in NASA Workshops with top scientists.  As a finalist to become an Educator Astronaut, Mrs. Leavitt is one of 194 teachers who comprise the Network of Educator Astronaut Teachers.

The Share Space Foundation plans to make Greenville a hub for more maps to be distributed and used by youth. The curriculum will eventually expand to include 1st through 12th grade and more use of robotic integration with the maps.

To date, there are 21 states and over 200,000 students who have been inspired through use of these maps.

Dr. Andrew Aldrin serves as the Director of the Buzz Aldrin Space Institute (BASI) and is an Associate Professor at Florida Institute of Technology.  BASI is a multidisciplinary institute created to advance space exploration and development toward the goal of establishing and maintaining a permanent human presence on Mars. Dr. Aldrin is also the President of the Buzz Aldrin Space Foundation.

Prior to FIT, Dr. Aldrin was President of Moon Express, responsible for day to day operations for the company.  Prior to coming to Moon Express, Dr. Aldrin was Director of Business Development and Advanced Programs at United Launch Alliance where he oversaw development of corporate strategies, business capture, senior customer relations and advanced program development for civil space markets.

Before ULA, Dr. Aldrin headed Business Development and Advanced Programs for Boeing’s NASA Systems, and Launch Services business units.  He has also served as a Resident Consultant at the RAND Corporation and Professional Research Staff Member at the Institute for Defense Analyses.

Dr. Aldrin holds a Ph.D. in Political Science from UCLA, an MBA from TRIUM, a MA in Science Technology and Public Policy from The George Washington University, and a MA in International Relations from the University of California at Santa Barbara.  He is an Adjunct Faculty member at International Space University and has been Adjunct Faculty at the University of Houston and California State University at Long Beach.  Dr. Aldrin serves on the Board of several foundations including the Secure World foundation, the Sea-Space Symposium, and the Tau Zero Foundation.