Visitors will see a continuously-looping commemorative video in the theater that includes interviews with some of Greenville’s prominent citizens who were there. Greenville residents who attended school during that time or were involved in the integration process in other ways will be present to tell their stories. Student Ambassadors will be on hand to direct visitors and answer questions. A children’s craft station will be set up in the classroom.

Historical artifacts, such as yearbooks, legal documents, and newspaper clippings, will be on display to tell the stories behind the integration of our schools. Each of the five black high schools that were serving students at that time will also have artifacts on display. 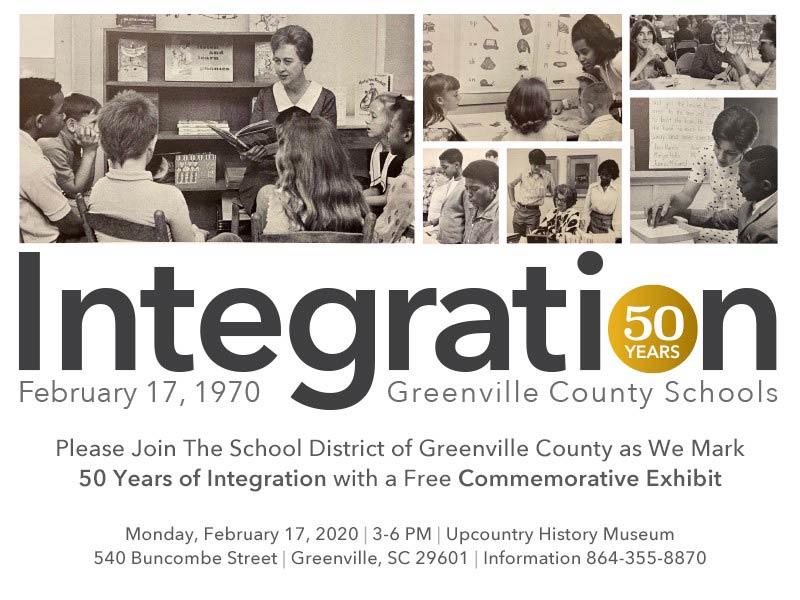 On Tuesday, February 17, 1970, after a long weekend, Greenville County Schools integrated all of its schools through a mid-year student reassignment plan that achieved approximately 80 percent white and 20 percent black students and teachers at all of its schools. More than 12,000 students and 500 teachers were moved. The board and administration had just four days to conceive and complete the integration plan.

Integration was originally scheduled for the fall of 1970, but a court decision in Mississippi and a push by local parents led the Fourth Circuit to reverse the September deadline. Originally set for February 9, the deadline was extended to February 17.