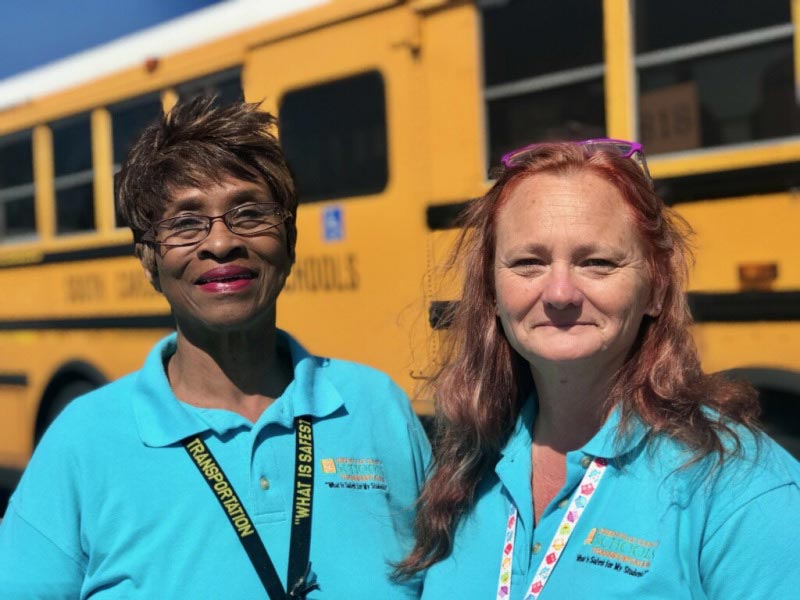 A Greenville County Schools special needs bus was hit by a tractor trailer on Tuesday along Fairview Road in Simpsonville.  The four students on board were unhurt.

“I just watched the bed of that truck come toward me and I held up my arms to cover my face because I knew it was going to hit us,” said driver Tammy Cummings.

Cummings is a sixteen year veteran of Greenville County Schools.  Seconds after impact Cummings can be heard on video calling into dispatch, “I’m on Fairview Road, a transfer truck has just run off the road and hit me. Everybody on my bus is okay, but we do need an ambulance, fire truck, the powerlines are down, we cannot move.”

Cummings said her training kicked in immediately.  “If we see a big vehicle coming toward us we either slow down or come to a complete stop so they can pass us that way we won’t collide.”

The driver secured the bus and then she and her aide began to comfort the children on board.  Cummings even played a game with one of the crying children to help him calm down.

“Today, I watched the dash cam video and I started crying all over again. To see it from her perspective was absolutely terrifying. She is a true hero and I'm sure anyone and everyone agrees. The way that she stopped the bus and then kept her cool while calling it in was nothing short of incredible. Then, how she calmed the kids down was inspiriting! I watched the video and saw my son sitting on the bottom left side of the video, saying, "I'm scared. Help." She was right there beside him and the other student, calming them down and distracting them from the chaos all while her heart was probably about to explode from adrenaline,” said Blythe, the parent of one of the students on board.

Bus Aide Carletta Cyrus says she is proud of her driver and thankful  for her quick action.  She said, “Each day, twice a day I pray before the bus moves out so I know we had God’s grace.  I felt a calmness in me when I saw the trailer coming.  My driver was excellent.”

“For her to have anticipated the crash, stopped the bus to lessen the force of the collision, remained calm and made the decision to keep the kids on the bus due to the power lines in just a matter of seconds is remarkable.  I don't know how many people who could have kept their composure let alone jump right into game time to distract the kids,” said Jessi, a parent of one of the students on board.

Both Cummings and Cyrus returned to work and ran their route the day after the crash.  The video of the wreck and their response will be used in future bus driver training.