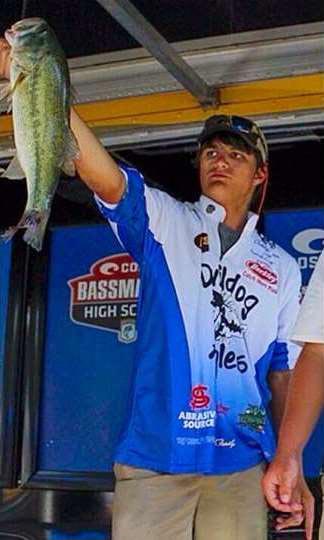 Travelers Rest High School Senior Oakley Connor has been selected as one of 12 members of the 2017 Bassmaster High School All-American Fishing Team. The honor was awarded after two different panels of judges reviewed Connor’s achievements in bass fishing, school work, and community service, and determined him to be one of the most outstanding young anglers in America. He was selected from about 380 nominations from across the country.

Connor has earned three wins in high school tournaments, including the TBF/SAF South Carolina High School State Championship in which he and his partner competed against 66 other teams. He also has 10 Top 20 finishes to his credit.
“He helped start our school’s fishing team and has been an integral part of its success over the past three and a half years,” said Michael Eudy, Connor’s fishing coach. “Oakley is a model student of TRHS and a model citizen for our Travelers Rest community.”
Connor served as the 2016 Travelers Rest High School Devildog bass fishing team’s vice president, and currently participates as an instructor in four teach-to-fish classes, serving three elementary schools and 265 students. Last summer, Connor served as a weekly route driver for Meals on Wheels and delivered warm meals to individuals and families in the Travelers Rest community.

As a member of the Bassmaster All-American team, Connor will receive a framed award and will be profiled in a special edition in an upcoming Bassmaster Magazine, which is read by 4.4 million fishing fans every issue.

Connor will also participate in a special All-American High School tournament to be held in conjunction with the Toyota Bassmaster Texas Fest in Lufkin, Texas from May 17 to 21. During the tournament, he will be paired with an Elite Series angler in this tournament that will benefit the Texas Parks and Wildlife Department on Sam Rayburn Reservoir.