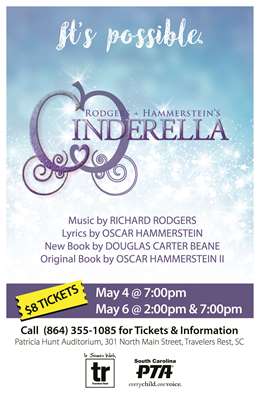 Travelers Rest High School department of fine arts will present “Rodgers + Hammerstein’s Cinderella” on Thursday, May 4 at 7 p.m. and Saturday, May 6 at 2 p.m. and 7 p.m. This newly reconceived version of “Cinderella” by Douglas Carter Beane expands upon the original, classic musical, yet retains its timelessness in a tale where dreams really do come true.

General admission tickets for school-aged children through senior adults are $8.00 each, and both can be purchased through the school website or at the door. The Patricia Hunt Auditorium at Travelers Rest High School is located at 301 North Main Street, Travelers Rest, SC 29690. Contact producer Tim Brown with any questions regarding the show at 864-355-1085.

In addition to new music, it includes Rodgers and Hammerstein’s most beloved songs, "In My Own Little Corner," "Impossible/It's Possible," "Ten Minutes Ago," and "Do I Love You Because You're Beautiful?" alongside a hilarious and romantic new book which introduces some new characters and surprising twists. 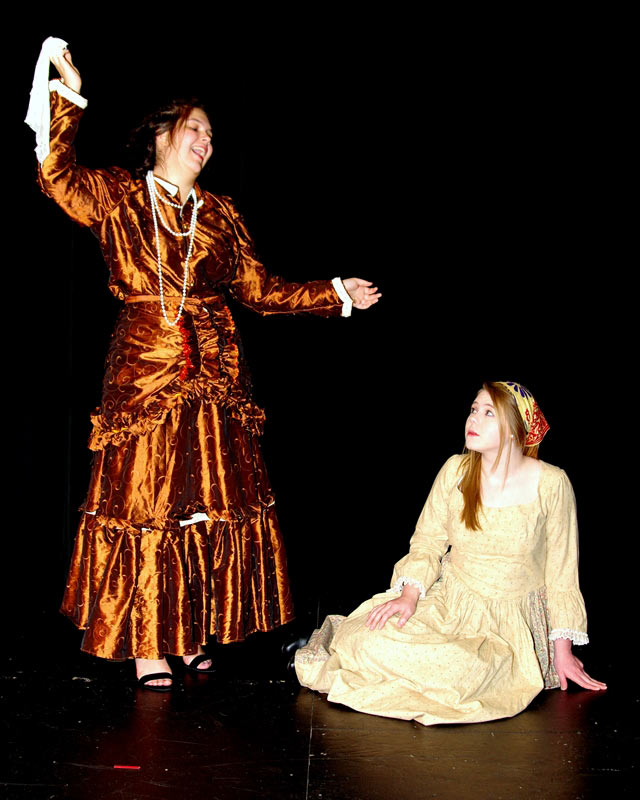 Cinderella and the Prince are played by Lillie Kieken and Adam Jones, respectively. Also featured are Madison Lanarz as Madame, Wyatt Coker as Sebastian, Adrianna Austin as Marie, Addie Townsend as Gabrielle, George Lafaye as Jean-Michel, A. J. Roth as Charlotte, and Colton Winship as Lord Pinkleton.

“Rodgers + Hammerstein’s Cinderella” began as a teleplay in 1957 for CBS with Julie Andrews. Two subsequent teleplays include one done in 1965 with Lesley Ann Warren, and the other in 1997 with Brandy, Whitney Houston, and Whoopi Goldberg. While several stage versions have appeared for decades starting in the London Coliseum in 1958, it wasn't until 2013 that “Cinderella” hit the Broadway stage thanks to a new book by Douglas Carter Beane who told Performances Magazine , "The problem with ‘Cinderella’ always is: she loses the shoe at intermission - and that gives you the second act just for the guy to find the girl, and that's really a lot to ask out of a second act." After declining the initial request, and upon reflection, he turned to the early French version of the fairy tale by Charles Perrault. What he found was a much richer story. Cinderella had multiple encounters with the prince and one of the stepsisters was friendly toward Cinderella. Cinderella also helps the Prince see the injustices in the court.