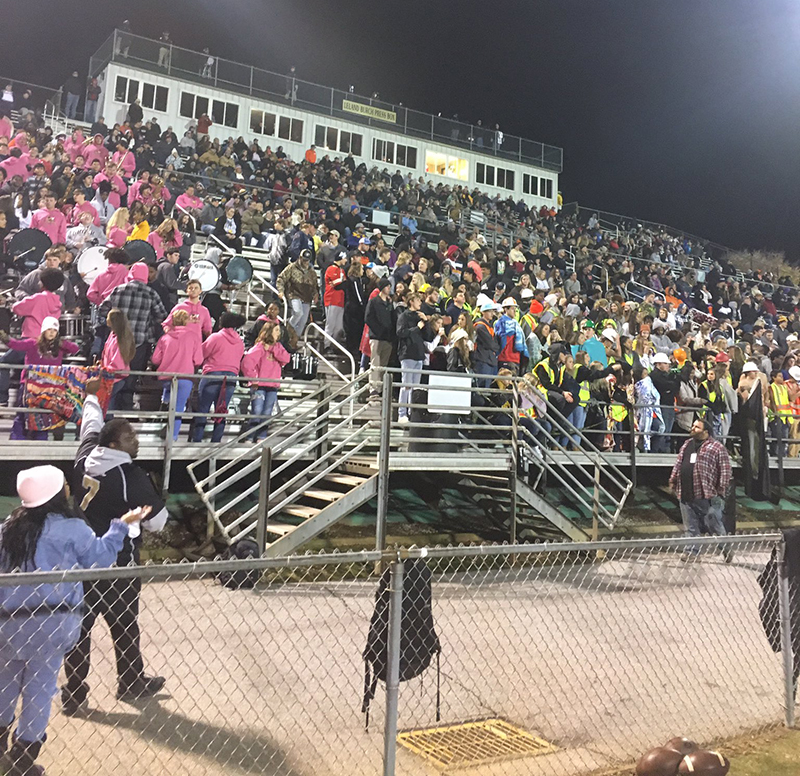 After coming up one game short in 2017, the Greer Yellow Jackets goal this year was to break through and play for a state title.  The Jackets have made it to Columbia, where they will face a Myrtle Beach team that has overcome adversity all season.  Myrtle Beach enters the title game at 11-1, but it has been a strange journey to this point for the Seahawks.  On September 7th Myrtle Beach defeated Socastee 63-20 to move to 3-0 on the season.  The Seahawks wouldn't see a football field again until October 2nd thanks to Hurricane Florence and the subsequent flooding.  No games.  No practices.  No contact formal contact between coaches and players as Horry County struggled through the post hurricane damage.  The Seahawks rebounded and rattled off four straight wins in October heading to their region matchup with Hartsville to close the season.  The game was originally scheduled to be the region opener, turned into the season finale and a 70-34 defeat on the road heading into the playoffs.  Myrtle Beach steadied themselves, winning home games vs Dreher (57-7), Marlboro County (42-14) and North Myrtle Beach (35-7) as the #2 seed in the playoffs.  That set up a return trip to Hartsville.  This time the Seahawks walked away with a 52-31 victory and a trip to Williams-Brice to face Greer.

While the Seahawks were battling the elements, Greer was challenging themselves with a daunting non-region schedule full of 5A schools.  The Jackets opened the season with a Week 0 39-26 loss to the Byrnes Rebels.  From that point on the Yellow Jackets have not lost a game, beating 5A schools Spartanburg, Westside and Mauldin and a strong 3A Union County team along the way.  Greer stormed through region play, outscoring opponents 259-60 along the way.  Greer defeated Pickens 35-7 to open the playoffs, then had to outscore York 63-40.  In the 3rd round Greer's defense came to the rescue as the offense managed only 6 points.  Turned out to be just enough as the Jackets won 6-3 over the Blazers.  In Upper State, Greer knocked off Daniel 35-23.

Greer enters the state title game with the 3rd highest scoring offense (42.2 ppg) in Class AAAA.  They also feature the 2nd best scoring defense at 15.1 points per game allowed.  The only team better, the Myrtle Beach Seahawks at 14.6 points per game.  Myrtle Beach also has the 4th highest scoring offense (41.5 ppg).  On offense Greer runs behind a massive offensive line lead by North-South All Star OT Kyle Schneider.  Shrine Bowler Dre Williams leads the ground attack, rushing for 2406 yards and 31 TDs this season.  Williams is also one of the more dangerous return men in the state on special teams, scoring three TDs on punt return and two more on kickoff return.  Matthew Huff became the Jackets starting QB after returning starter Trey Houston went down with an injury early in the year.  Huff has accounted for 28 total touchdowns this year, 17 through the air and 11 on the ground.  On defense, the Jackets are lead by their dangerous front 7.  Quantavious "Quack" Cohen is a Shrine Bowl selection and junior McZavion Holley has stepped up huge for the front line this season.  Safety Ethan Alexander was selected a North-South All-Star.

Myrtle Beach's stingy defense is lead by North-South All-Star JB Favorite on the defensive line.  Shrine Bowler Evan Jumper anchors the offensive front for a balanced Seahawks attack that features North-South All-Star Marcus Grissett at WR.  Junior Luke Doty, a verbal commit to the University of South Carolina already,  is a dual-threat at QB for the Seahawks.  Doty has thrown for over 2700 yards and 34 TDs this season.  He's rushed for another 650 yards and six scores.

Explosive offenses against the two best 4A defenses in the state!  Should be a great matchup as Greer faces Myrtle Beach on Friday at 1:00 pm for the 4A State Championship!