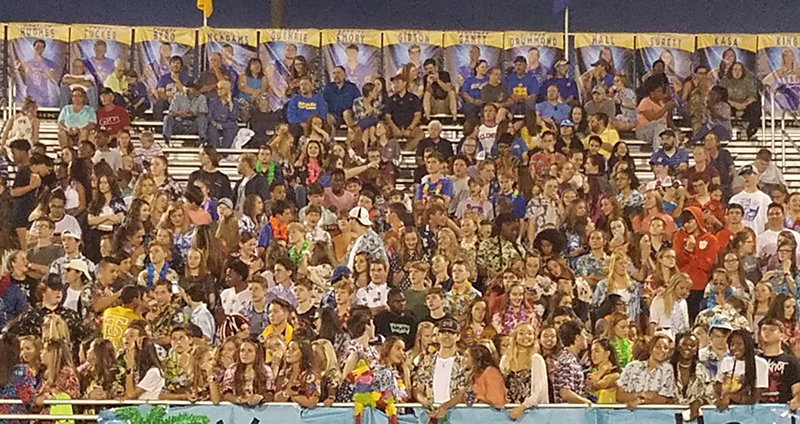 It was another great week of high school football across Greenville County.  Our featured Game of the Week pitted rivals Eastside and Wade Hampton, a game on paper that some thought might not be close, as Eastside entered 2-0 and the Generals 0-2.  But it was Wade Hampton who controlled the game early, building a 15-10 halftime lead on the Eagles.  Eastside was able to take the lead in the 3rd quarter after QB Marshall Skoloff scrambled 14 yards to make it 17-10.  Early in the 4th, Skoloff connected with Kodi Jones to push the lead to 24-15 and K Joe Bontrager added a 28-yard FG.  Trailing 27-15, the Generals were able to cut the lead to six, but ran out of time as they came up short on mounting a game winning drive.  Eastside moves to 3-0 on the season and will be on a bye this week as they prepare to travel to Broome (2-1) on September 14.  Wade Hampton (0-3) will also be on a bye this week, but coming off their best game of the year the young Generals feel they can build on that momentum heading into region play.  Wade Hampton will travel to Laurens (1-1) on the 14th.

Over at Berea, neighboring rivals Berea and Carolina entered Friday night both looking for their first win of the season.  The two teams traded scores early and sat tied at 6 after one.  The Bulldogs scored 15 unanswered in the 2nd and grabbed a 21-6 lead at the half.  Carolina cut the lead to seven in the third and in the final quarter the Trojans scored to make it 21-20, but a failed conversion left Carolina trailing and the Bulldogs were able to run out the clock.  Berea (1-1) will travel to Pendleton (1-1) on Friday.  Carolina (0-3), after opening with three straight road games, will finally be at home as they take on Christ Church (1-2) on Friday night.

It was a thriller down in Belton as Greenville traveled to BHP in a potential playoff preview type game.  The Red Raiders grabbed an early 7-0 lead after Davis Beville hit Aziz Huff.  Greenville got the ball back and Collin Wakefield pushed the lead to 14 at the end of the first quarter.  After BHP cut the lead to 14-7, Jack Henegan pushed it back to 10 with a FG.  Costly mistakes by the Raiders allowed the Bears to rally and tie the score at 17 at the half.  In the 3rd, Wakefield again found the endzone to give Greenville a 24-17 lead, which they held until the closing minute of the game.  With :33 seconds remaining, a desperate heave into the endzone resulted in what Greenville believed was the game sealing interception.  However, the BHP receiver was able to get his hands on the ball and force a tie-up in midair resulting in a touchdown for the Bears.  Trailing 24-23, BHP decided to go for two and the win, which they completed for 25-24 lead.  Greenville made a last ditch effort, but were unable to get out of bounds in time to try and game winning FG as the Raiders dropped their first game of the season.  Greenville (2-1) heads into Spirit Week with longtime rival JL Mann.  The Patriots (0-2) will host the Raiders on Friday night.

Mauldin bounced back in a big way after a disappointing loss to open the season at rival Hillcrest.  The Mavericks hosted JL Mann and took the opening possession right down the field for seven as Jason Branham-King rumbled in from 15 yards.  A fumble by the Patriots on the ensuing kickoff set the Mavs offense up with great field position and Raekwon Fenderson scored form four yards out for a 14-0 lead.  Ben Dority added his first of three field goals on the night to make it 17-0 after one.  Mauldin's defense was outstanding all night, holding the Patriots offense to under 100 total yards.  Mauldin QB's Joe Owens and Jeb McBride both threw for over 100 yards and a score.  Owens connected with Fenderson in the 2nd quarter from 15 yards out.  McBride got really lucky on an errant screen pass in the 3rd that RB Jordan Franklin hauled in surrounded by Mann defenders and took 80 yards to the house.  Franklin would add a 6-yard TD run in the 4th.  Mauldin moves to 1-1 on the season and will host Greer (2-1) on Friday night.  It will be the first regular season meeting between these two teams since 1981.

Greer (2-1) continued its march through a very difficult non-region schedule filled with 5A opponents as the Jackets hosted Westside on Friday night.  It took one play, a 69 yard TD by Dre Williams, for Greer to take command of the game.  The Jackets defense forced a Rams turnover, which Williams turned into points on a short TD run and a 14-0 lead.  The Jackets just missed a TD catch on their next possession and settled for an Edwin Sales FG from 37 and a seventeen point lead.  Before the first quarter ended, Greer pushed the lead to 24 on a Treyvion Houston to Braxton Collins TD strike.  Williams would add a pair of scores in the second half, including a wild 54-yard TD where he bounced off of multiple Westside defenders.  DT Quack Cohen got into the offensive mix, scoring on a one yard run in the 4th and sealing a 48-14 victory for the Jackets.

Perhaps no team in Greenville County has had a better start to the season than the Travelers Rest Devildogs.  After going 1-9 in 2017, the Devildogs find themselves undefeated after defeating Ware Shoals 49-0.  TR's defense forced turnovers on the Hornets first two possessions.  RB Deonte Byrd and QB Wilson Hendricks turned those mistakes into scores for the Devildogs and an early 14-0 lead.  Travelers Rest has been sound in all three phases this season and Derrick Fields and the punt return unit added pushed the lead to 21 with a 45-yard return to close out the 1st quarter.  Travelers Rest rolled to 3-0 on the season and will travel to Pickens (1-2) on Friday night.

The Hillcrest Rams are also off to an undefeated start to 2018 after knocking off rival Mauldin last week, the Rams hosted another local rival Woodmont on Friday night.  Hillcrest grabbed a 7-0 lead when offensive lineman Jaylin Price found himself in the right place at the right time to recover a Rams fumble in the endzone.  Will Watts added a TD toss to push the lead to 14 and the Rams closed the half with a late score for a 20-0 lead.  Woodmont dominated time of possession all night, including a drive that lasted over nine minutes in the 3rd quarter, but the Hillcrest defense kept them off the board as the Rams moved to 2-0 with a 27-0 win.  Hillcrest will travel to Laurens (1-2) this Friday.  Woodmont (0-3) will try and regather themselves as they head to a bye week before traveling to Greenwood (2-1) on September 14th to open region play.

After starting the season with a disappointing last minute loss at Eastside, the Southside Tigers have rattled off two straight wins over 5A opponents.  The Tigers steamrolled Riverside Friday night 56-6.  The Tigers have been riding a strong running game, powered by the big play capability of QB Jalon Calhoun and new RB Brayden Bennett.  Southside (2-1) will travel to Georgia on Friday to face Jefferson (1-1).  Riverside (0-3) will head into a bye week as they prepare for region play, where they will travel to Boiling Springs (1-1) on the 14th.

Coming off of an early season bye, the Blue Ridge Tigers hosted Chesnee in a non-region match.  The Tigers were able to keep it close early, tying the score at 7 after one quarter.  The Eagles dominated the second quarter and grabbed a commanding 35-7 lead at the half.  Blue Ridge falls to 0-2 on the season and has a tough task on Friday night as they travel to undefeated Chapman.