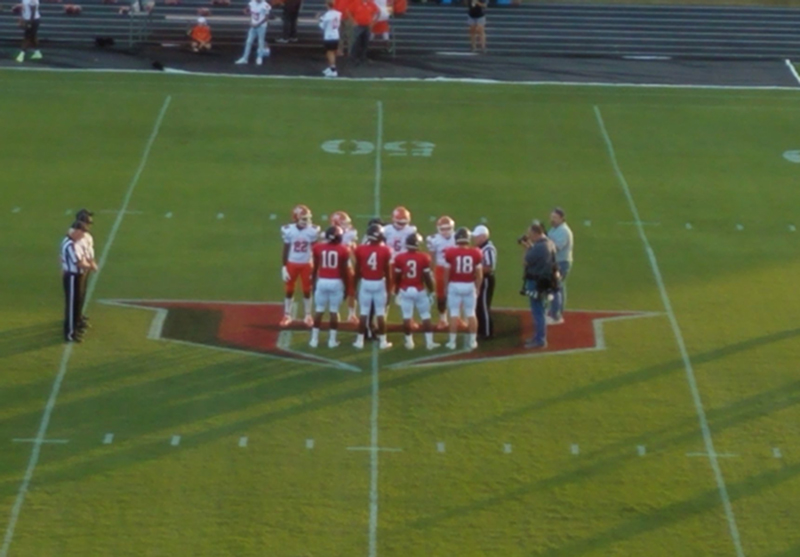 Week 1 is in the books and every team has kicked-off their 2018 campaign.  Here is a quick recap of how GCS teams fared in Week 1:

Hillcrest Rams vs Mauldin Mavericks: It was the featured Game of the Week and the Golden Strip rivalry lived up to the billing.  The host Rams took advantage of Mauldin mistakes to walk away with a 20-14 win, but the game remained in doubt to the final second.  After a scoreless first quarter, the Rams intercepted Mauldin in the endzone and returned it out near midfield.  One play later RB AJ Hill raced 53 yards for the games opening score.  After exchanging punts, Hillcrest got the ball on the Mavs side of the field and two plays later Will Watts hit Deonte Smith for a 44-yard score and a 13-0 halftime lead.  Mauldin cut the lead in half when Jason Branham-King barreled in from three yards out.  After a defensive stop, the Mavs were on the doorstep for the go ahead score, but the Rams defense forced another interception in the endzone.  Following the turnover, Ethan Bemish drove the Rams into the endzone with a 62-yard strike to Malik Eldridge to open the fourth quarter.  Mauldin again cut into the lead when Joe Owens found Raekwon Fenderson for a short TD.  The Mavs defense was able to keep Hillcrest from scoring, but the Mavs had 80 yards to go in under a minute.  Owens drove the Mavs down the field and had three shots at the endzone, but was sacked on the games final play as the Rams defense sealed the deal.  Hillcrest (1-0) will host Woodmont (0-2) on Friday.  Mauldin (0-1) will host JL Mann (0-1).

Southside Tigers vs JL Mann Patriots: Another game that came down to the final minutes.  Southside got things started by turning a blocked punt into six points and an early lead.  After trading a couple possessions, the Patriots tied things at 6 when Deonte Sloan caught a slant, broke a tackle and raced into the endzone.  Southside regained the lead on a short TD run by Brayden Bennett which made it 13-6 at the half after a late scoring opportunity for the Patriots ended with a strip sack fumble recovery by the Tiger defense.  One play into the second half, Tiger QB Jalon Calhoun scrambled out of the pocket and raced 60 yards to extend the Tigers lead to 19-6.  A Patriot TD cut into the lead to open the 4th, and after a Tigers punt, Mann was on the move again until the Southside defense forced a fumble.  Brayden Bennett capped off the drive with his second TD run of the day and Southside took a 26-13 lead.  The Tigers would hold on for a 26-19 victory.  Southside (1-1) will host Riverside (0-2) on Friday.  Mann (0-1) will travel to Mauldin (0-1).

Eastside Eagles vs Riverside Warriors: Eastside entered the game still trying to settle on a starting QB.  Marshall Skoloff entered the Week 0 game vs Southside late and conducted the game winning drive.  Started Dawson Conrad played well and got the start again vs rival Riverside.  Conrad lead the Eagles right down the field for a 6-0 lead.  Riverside answered when QB Andrew Brown hit RB OJ Acosta for a 49 yard score and the Warriors briefly grabbed the lead 7-6.  Skoloff entered the game for Eastside and found Armani Elmore for a 70 yard score.  Skoloff would connect on three more TD's in the first half, finding Payton Mangrum for 47 yards, Reggie Rogers for 40 and finding Elmore again for 37.  In the first half Skoloff went 12/16 for 274 yards and 4 TDs.  OJ Acosta did his best to keep Riverside competitive, tallying 117 yards rushing and adding two total TDs, but the Eagles held a firm 33-14 lead.  Skoloff added his fifth TD in the 3rd and former Warrior Max Louris sealed the deal with a 36-yd run as the Eagles rolled to a 47-21 victory.  Eastside (2-0) will be on the road at another rival, Wade Hampton (0-2), on Friday.  Riverside (0-2) will travel to Southside (1-1).

Greenville Red Raiders vs Wade Hampton Generals: QB Davis Beville got the Raiders going early with a 32-yd keeper for a 7-0 Greenville lead.  Sloan Skelton punched in a short TD run to make it 14-0 Raiders.  Beville found Caleb Krall in the 2nd to push the lead to 20 and Jalen Tate added a pick six before the half as the Red Raiders raced out to a 27-0 lead.  The 27 points would hold up as the Raiders rotated guys in the second half and the defense held the shutout.  Greenville (2-0) travels to BHP (1-0) on Friday.  Wade Hampton (0-2) will host rival Eastside (2-0).

Travelers Rest vs Carolina: It was one of those nights where everything went right for the home team and everything that could go wrong for the visitors did as the Devildogs raced out to a big lead and rolled to a 63-0 victory over the Trojans.  Deonte Byrd opened the scoring with a TD run, his first of three scores in the half.  Wilson Hendricks added a pair of TD strikes to Derrick Fields and Esaias Tucker and the defense added a pick six.  Cam Henderson added a pair of late scores as TR rolled at home.  The Devildogs (2-0) will be on the road at Ware Shoals (0-2) on Friday.  Carolina (0-2) will play their third straight road game to open the season as they travel to Berea (0-1).

Berea Bulldogs vs Liberty Red Devils: Berea dropped their 2018 opener at home to Liberty 22-6.  A defensive struggle early, the Red Devils were able to take a 10-0 lead into the half.  Liberty added scores in the third and early in the fourth for a 22-0 lead.  Following the last Red Devil TD, Berea returned the ensuing kick-off for their only score of the night.  Berea (0-1) will try and regroup as they host neighbor Carolina (0-2).

Greer Yellow Jackets vs Spartanburg Vikings:  It had been 43 years since the Jackets and Vikings played each other.  Greer QB Treyvion Houston took full advantage of the opportunity to battle a good Spartanburg team.  Houston rushed for 99 yards and passed for 142.  After Matthew Huff converted a 4th and 2 for a 24 yard TD, Greer found themselves holding a 14-0 lead at the end of one quarter.  Midway through the 2nd, Houston connected with Braxton Collins from 24 yards out for a 21-0 Jackets lead.  The Jackets D swarmed the Vikings all night.  Having only gained 56 yards late in the 2nd, the Vikings switched out QBs.  It didn't matter as Quck Cohen hit new QB Seth Smith forcing an errant throw and a Greer interception.  Houston hit Austin Green for 22 yards and a 28-0 lead.  Spartanburg did score late to make it 28-7 at the half.  The teams would trade a couple turnovers and punts in the third.  Spartanburg added a FG before Dre Williams got loose in the fourth and extended the lead to 34-7 on his 15-yd TD run.  Williams set up his own TD run with a 49 yard gallop earlier in the drive.  Greer would win 37-17 after a late desperation TD by the Vikings.  The Yellow Jackets (1-1) continue a tough non-region gauntlet as they travel to 5A Westside (0-1).

Woodmont Wildcats vs Palmetto Mustangs:  Woodmont used their ball control offense to march down the field and grab a 3-0 lead vs the Mustangs.  Late in the 1st, Palmetto broke loose and scored 21 unanswered to close the half with a 21-3 lead.  The Wildcats were able to cut into the lead with a couple of second half scoring drives, but eventually the Wildcats fell 27-16 to the Mustangs.  Woodmont (0-1) will travel to Hillcrest (1-0) on Friday.