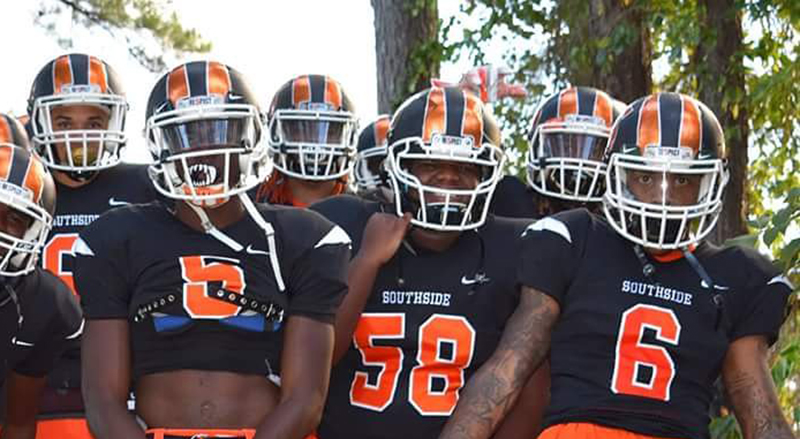 With only two weeks left in the regular season GCS teams find themselves jockeying for playoff position and region titles.  Southside enters Friday night with a 6-2 overall record and the Tigers are 2-0 in Region II-AAA and in contention for a region crown.  Coming off a 5-7 season in 2017, the Tigers have had a resurgence in 2018 under new head coach Jeremy West.  The Tigers feature one of the areas dynamic rushing attacks, powered by versatile QB Jalon Calhoun and RB Brayden Bennett.  Calhoun and Bennett will be key Friday night as the Tigers host last seasons Class AAA state runners-up, the Chapman Panthers.  Chapman enters the contest also 2-0 in region play and 8-0 overall.  The Panthers feature an explosive, high scoring offense.  The Tigers will rely on their run game to try and slow the Chapman attack.  Southside's defense has been outstanding of late, not allowing more than 10 points in a game since August 24th.  It's Senior Night at Southside and no better way to send off the Class of 2019 than with a region title!

In Class AAAA, Greer travels to Eastside for a de facto region title matchup.  The Yellow Jackets and Eagles both enter with identical 7-1 overall and 3-1 in region marks.  Eastside brings a balanced, aggressive offensive attack that features playmakers all over the field.  Trandfer RB Max Louris has become a weapon for the Eagles out of the backfield and Eastside's platoon of quarterbacks Marshall Skoloff and Conrad Dawson can attack the edge with receivers Reggie Rogers, Payton Mangrum and Armani Elmore. The Yellow Jackets lost their starting QB two weeks ago, but Senior backup Matthew Huff has stepped right in and the Jackets offense has not lost a stride.  RB Dre Williams powers the Greer attack and is a threat to score from anywhere on the field on both offense and special teams.  Lead by an experienced defensive line, including disruptive tackle Quack Cohen, the Yellow Jackets feature one of the best defenses in the state.  Eastside will need to protect their quarterbacks and get the ball quickly to their playmakers.  The winner of this game guarantees themselves at least a share of the Region II-AAAA title and in potentially a top seed in the upcoming playoffs.

Greenville (5-3, 2-1) remains in the picture to grab at least a share of the region title if Eastside wins as the Raiders and Eagles will meet next week.  This week Greenville needs to take care of business at home on Senior Night against Berea (1-7, 0-3).  Senior QB Davis Beville and RB Collin Wakefield have been key to the Raiders offense all season and they look to close out their regular season career at Sirrine Stadium with a big win.

Travelers Rest looked to be on a playoff track with their 5-0 start, but 0-3 in region play has the Devildogs desperately needing a win at Blue Ridge (1-7, 1-2) to stay in the playoff picture.  The Devildogs trail the Tigers by a game for the fourth and final guaranteed playoff spot out of Region II-AAAA.  The Devildogs got a big night from QB Wilson Hendricks in a 44-13 non-region victory over the Tigers earlier this year.  A young Blue Ridge team can lock down a playoff seed if they can get revenge on TR.

In Class AAAAA, the Woodmont Wildcats started the season 0-4 and looked to be sitting on the outside looking in come playoff time, but the Wildcats defense has been outstanding in region play and the offense has settled into their option attack as Woodmont has won three straight and now sits in contention for a region title.  At 4-1 in region, the Wildcats sit one game behind region leader TL Hanna.  Big road trip for Woodmont this week as they head to Easley (4-4, 3-2).  A win on Friday and the Wildcats would host Hanna for the Region I-AAAAA title in week 10.

Also in Region I-AAAAA, a pair of young teams in JL Mann and Wade Hampton meet in a big game for very different reasons.  The Patriots and Generals both enter week 9 winless.  Both teams are looking for a win to send themselves into the offseason with a little momentum.  Wade Hampton would like to send their senior class off with a win in their final home game.

In Region II-AAAAA, Hillcrest (4-4, 1-4) needs to find some wins if they hope to sneak in the playoffs as either the 5-seed out of Region II or as a possible at-large.  The Rams have struggled in region play and have played four different players at quarterback as they have had a rash of injuries.  For Senior Night, the Rams host region co-leader Byrnes (6-2, 4-1).  Senior do everything athlete Quen Jefferson will be called on to power the offense versus a very good Rebels defense.  On defense, the Rams will need to keep a balanced Byrnes offense in check.

Mauldin currently sits in the 5-seed spot in Region II.  The Mavericks are coming off a big overtime victory over Spartanburg last Friday night.  At 3-5 overall and 2-3 in region play, the Mavs hold a one game lead over Hillcrest and one game and head to head advantage over Spartanburg.  It will be a tough task for the Mavericks on the road at region co-leader Dorman (7-1, 4-1).  Mauldin's defense has been their calling card all season and Friday night the Mavs will rely heavily on that unit to slow down Dorman's powerhouse offense.

Riverside (0-8, 0-4) will travel to Spartanburg (2-6, 1-4) for a region matchup.  The Vikings are holding out slim hopes for the playoffs.  The Warriors are looking to steal their first win of the season.  Riverside will rely heavily on Senior QB Andrew Brown and the ground game to slow the pace and keep the game close.

Carolina (0-8, 0-2) will travel to Broome (3-6, 1-2) as the Trojans look to grab their first victory of the season.  Carolina has gotten improved play from QB Austin Neese and the Trojans feature a pair of backs in Steve Parker and Isaiah Watts who can help control the clock and keep the Centurions offense off the field.