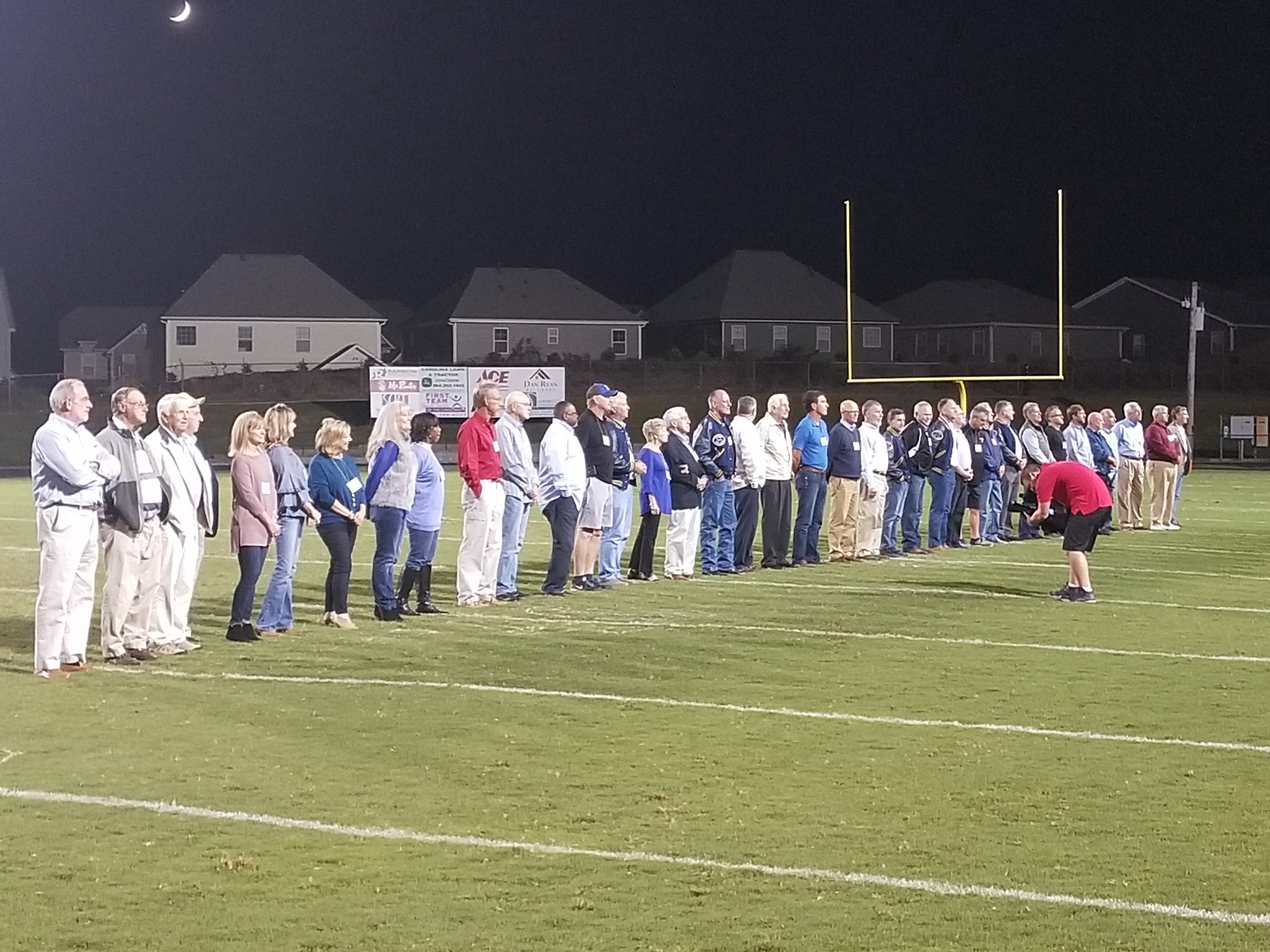 The 2018 Eastside Eagles hosted the 1977 AAAA State Champion Eastside Eagles on Friday night.  The 2018 Eagles put on an impressive show in front of the '77 champions as Eastside defeated Blue Ridge 56-22.  Payton Mangrum got things started for the Eagles as he hauled in a swing pass from QB Marshall Skoloff and raced 22 yards for a touchdown.  Max Louris followed with three TD runs, including a 69-yd effort through the middle of the Blue Ridge defense as Eastside built a huge halftime lead.  Louris would add a TD run in the 3rd, his fourth on the night.  Louris finished with 131 yards on only 10 carries.  Randy Veal added a 44-yd TD run and Skoloff added a second TD toss to Reggie Rodgers who raced 37-yds with a swing pass.  The win moves Eastside to 7-1 and 3-0 in region play and sets up a de facto region title matchup next week as the Eagles host the Greer Yellow Jackets who are also 7-1 and 3-0 in Region II-AAAA.  Blue Ridge (1-7, 1-2) will host Travelers Rest (5-3, 0-3) next week.

Hosting Berea for homecoming, Greer took little time to dispatch of the young Bulldogs.  On the opening possession, Matthew Huff hooked up with 6-4 freshman Jaleel Skinner for 32-yds on the Jackets opening possession.  The Greer defense forced a quick 3-and-out and Dre Williams returned the punt 63 yards as Greer built a 13-0 lead.  On Berea's next possession Quack Cohen hit the quarterback and Cam Hammonds grabbed the ball out of the air and returned it 32-yds for a score as the Jackets got points fro offense, defense and special teams.  After another Berea punt, the Greer offense got back on the field and one play later Huff hit Cam Martin for a 55-yd TD and a 28-0 lead and the game went to a running clock before the end of the 1st quarter.  Huff hooked up with Miller DeArmond in the 2nd quarter.  On the ensuing kickoff, the Greer special teams pinned the Bulldogs back on the 1-yd line and the next play the Jackets defense forced a Safety.  On the ensuing kickoff, the special teams struck again as Cam Martin raced 75-yds for a score.  Austin Green added a TD reception just before half for a 44-0 Jackets lead.  Vonte Martin added a score in the 4th as Greer cruised to a 51-0 victory.  Next up for the Jackets, a trip to Eastside (7-1, 3-0).  With a win Greer can grab the Region II-AAAA title and a #1 seed in the 2018 playoffs.  With their win on Friday, Greer has grabbed the #1 ranking in Class AAAA in the state rankings.  Berea (1-7, 0-3) will travel to Greenville (5-3, 2-1) next Friday night.

Greenville kept themselves in the Region II-AAAA conversation with a 58-17 victory over Travelers Rest.  Region play has not been kind to the Devildogs who entered region play 5-0, but have lost three straight to Eastside, Greer and now Greenville.  The Red Raiders struck first with a 50-yd run by Collin Wakefield for the 7-0 lead.  After a Raiders FG pushed the lead to 10, Wilson Hendricks connected with Jake Hall for a 29-yd score to cut the lead to 10-7 in the 2nd quarter.  Wakefield added a 1-yd TD run to push the lead back to ten points, but TR's Gabriel Emory hit a FG just before half and Greenville went to the locker room with a 17-10 lead.  Wakefield was dominant Friday night and opened the 2nd half with his 3rd rushing TD of the night, this one from 11-yds out.  Barrett Staunton hauled in a 50-yd TD strike from Davis Beville and the Raiders quickly pushed the lead to 31-10.  Hendricks found Hall again for a 7-yd TD to end the 3rd, but the Devildogs trailed 31-17 heading to the final frame.  Beville found Staunton again to open the 4th quarter and the Red Raiders got a blocked punt and scoop and score from Reggie Norris to make it 45-17.  Wakefield added a 4th TD late for a 52-17 final.

In Region II-AAAAA, Mauldin hosted Spartanburg on Homecoming in a game that was basically a must win for each team as they try and keep playoff hopes alive.  The Vikings struck first after they forced their second Mavs fumble and returned it to the 3-yd line.  Spartanburg grabbed a 7-0 lead and held it into the 2nd quarter.  Devon Scott, the Mauldin safety, in on a short yardage package punched in the Mavs first score in the 2nd to tie the game at seven.  Mauldin dominated yards, outgaining the Vikings 229 to 67, but struggled to mount scoring opportunities.  The 2nd half was a defensive and field position struggle as neither offense mounted much of a threat and the game went to overtime.  In OT, Spartanburg attempted a pass on 1st down which was batted in the air and hauled in by Chase Thompson.  Three plays later, Devon Scott punched it in from the 5-yard line and the Mavs held on for the 13-7 victory.  Mauldin (3-5, 2-3) will travel to Dorman (7-1, 4-1) next Friday night.

Hillcrest was also fighting for its playoff hopes as the Rams traveled to Boiling Springs Friday night.  Slow starts have been an issue for the Rams and Boiling Springs took advantage, jumping out to a quick 14-0 lead with a TD on their opening possession and then forcing a Rams fumble to set up the second score.  Quen Jefferson cut the lead in half with a 6-yd TD run to end the 1st quarter.  Boiling Springs really took control in the 2nd, outscoring the Rams 21-0 to grab a 35-7 halftime lead.  Following a Hillcrest interception in the 3rd, the Bulldogs pushed the lead to 42-7.  Late in the 4th, Colin Whitfield added a short TD and Ethan Beamish hit Jefferson for a 2-yd TD pass, but the Rams fell 42-21.  Hillcrest (4-4, 1-4) will host Byrnes (6-2, 4-1) on Friday night.

In Region II-AAA, Southside kept its region title hopes intact as the Tigers defeated Broome 50-7.  Brayden Bennett got the Tigers started with a 32-yd TD run up the middle of the Centurion defense.  Southside forced a Broome punt, which Trayy Oglesby returned 75 yards for a 14-0 lead.  Early in the 2nd quarter, Broome cut the lead in half with a long TD run by Ja'Qun Wilkins.  Southside closed the quarter with a pair of TD's, including an 87-yd run by Oglesby.  The second half was all Tigers as Southside scored twice in the 3rd and a late TD in the 4th to cruise to a 50-7 victory.  The Tigers (6-2, 2-0) will host Chapman (8-0, 2-0) for the region title next Friday night.

Woodmont has loved life in region play in 2018.  The Wildcats opened the season 0-4, including a narrow 9-0 loss in region to Greenwood.  Out of that game the Wildcats knew their defense was playing at a high level and once the offense caught up, Woodmont caught fire and won four straight to put themselves in position to contend for a region crown.  After a back and forth 1st quarter, the Rams and Wildcats sat locked 10-10.  Cooper Nicholson gave the Wildcats the lead with a 23-yd interception return, but Westside answered.  A missed PAT by the Rams left the score 17-16 at the half.  Clay Bartunek scored late in the 3rd to push the lead to 24-16, but again Westside answered making it 24-22 heading to the 4th.  Westside scored first in the last quarter to grab a 28-24 lead.  With 3:18 left to play, Woodmont RB Joshua Kamoto found the endzone and the Wildcats grabbed a 31-28 lead.  The defense shut the door on Westside as the Rams failed to convert a 4th and 7 with 1:28 to play and Woodmont moved to 4-1 in region play.  Woodmont (4-4, 4-1) will travel to Easley (4-4, 3-2) on Friday.  A win sets up a huge region matchup in week 10 vs unbeaten TL Hanna.