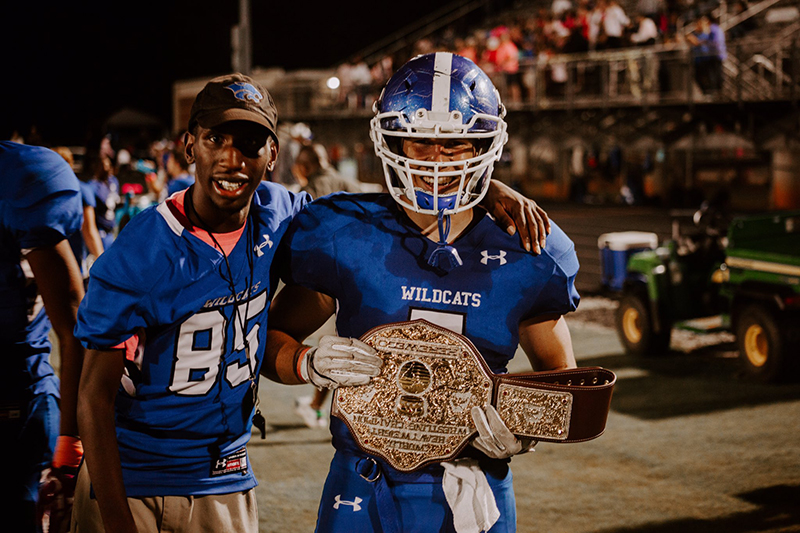 Hard to believe, but the 2018 high school football regular season in Greenville County has come to an end.  For some teams week 10 was a chance for seniors to play one last game for their high school.  For some week 10 served as a tune-up for the upcoming playoffs.  And for the rest week 10 was one last chance to improve playoff seeding or simply to fight to stay alive for the playoffs!  Hillcrest and Mauldin met in just such a game, with a potential spot in the Class AAAAA playoffs on the line in the Golden Strip rivalry game.  Coming into Friday night, Mauldin sat at 3-6 overall, but with two region wins the Mavericks held onto the fifth and final automatic playoff spot out of Region II-5A.  The Rams sat one spot back and with a win would force a three-way tie for the 5th seed and create an opportunity for the Rams to earn the At-Large playoff spot in Class 5A.  Rivalry game, with a "must-win" attitude and both defenses came ready to play.  Mauldin struck first and it was the defense creating opportunity.  The Mavs pinned Hillcrest deep in their own territory and the Mauldin defense kept the Rams pinned back, forcing a punt.  Hillcrest sailed the snap over the kickers head and into the endzone for a safety and a 2-0 Mauldin lead.  Mauldin's defense kept the game low scoring and even after a blocked punt and a big punt return by the Rams, the Mavs defense held the Rams to zero yards on those possessions.  Hillcrest finally broke through late in the 2nd quarter when Colin Whitfield got behind the Rams power run package and plowed his way into the endzone from 4-yds out for a 6-2 lead that Hillcrest would carry to the half.  The two defenses would slug it out deep into the fourth quarter, when Mauldin finally got some momentum and drove deep into Hillcrest territory.  On 2nd down from the 14-yd line, Mauldin tried to catch the Rams off-guard and drop a quick pass over the middle to the TE but safety Brandon Higgs made the play of the game with an interception in the endzone to keep the score 6-2.  Again the Mavs defense would hold, and another bad snap on punt gave the Mavs 1st and goal from the 6-yd line with under four minutes to play.  Mauldin pushed the ball to the 1-yd line, but the Rams stuffed a 3rd an 1 run and after a penalty, sacked the Mavs to force a do or die 4th down.  Mitchell Norman dropped back and was forced out of the pocket and his mad dash for the endzone came up 2-yds short.  Hillcrest would hold the ball until their were :07 seconds remaining and took a safety to get a free kick away and preserve a wild 6-4 victory.  With the win Hillcrest, Mauldin and Spartanburg finished tied for 5th in Region II-5A.  The Vikings won the tie-breaker and the automatic playoff spot.  Hillcrest, at 5-5 with wins over non-region playoff teams like Woodmont and Laurens has put themselves squarely in the mix for the one At-Large spot in the 5A playoffs.  With two losses to the Rams, Mauldin's season came to an end on Friday night.

Woodmont had already locked up a home playoff game out of Region I-5A.  The Wildcats entered Friday night on a five game win streak in region play and were hosting undefeated TL Hanna for a shot at the region title.  Hanna got on the board first as Shrine Bowler Zachh Pickens shifted from his normal defensive line spot to the Jackets backfield to punch in a short TD run and a 6-0 lead.  Late in the first Woodmont's defense, which has played so well in region play, forced a Hanna punt from deep inside their own territory.  The snap sailed over the punters head and Brian Bratka recovered the loose ball in the endzone for a 7-6 Wildcat lead.  Defense controlled the pace of play much of the first half as the teams traded punts, but with just under six minutes to go in the half Hanna broke through on a 28-yd TD run by Isaiah Norris for a 13-7 lead that they would carry to the half.  In the second half, Woodmont's magical run finally ran out of steam as the Jackets outscored them 28-0 to take the 41-7 victory.  Hanna won the Region I-AAAAA title, but with its 2nd place finish in region the Wildcats will have a home playoff game on November 9th vs Gaffney, the #3-seed out of Region II.

Thursday night had a playoff feel to it at Eastside High where the 8-1 Eagles hosted the 6-3 Greenville Red Raiders.  Both teams entered with a  region loss to Greer, meaning the winner of this game would grab the #2-seed out of Region II-4A and a home playoff game.  Eastside struck first on a Max Louris TD run from a yard out.  Greenville would answer with a 16-yd scamper by RB Collin Wakefield.  Wakefield and Louris, both 1,000 yard rushers on the season, put on quite the duel on Thursday night.  At the half Louris would have 124 yards rushing and Wakefield 96.  Louris accounted for both Eagle scores in the half, but Wakefield got some help from Shrine Bowl QB Davis Beville who gave Greenville a 21-14 lead with a rushing score and a TD toss to Aziz Huff.  In the 3rd quarter, Wakefield and Beville extended the Raiders lead to 34-14 with a pair of TD runs.  Ashton Whitner came up with a huge interception in the endzone to shut down an Eagles scoring drive late in the quarter.  Beville opened the 4th with a TD strike to Caleb Krall.  Eastside answered with a 73-yd TD from Dawson Conrad to Reggie Rogers, but Wakefield sealed the deal with a 62-yd TD run as the Raiders went on for a 55-23 victory.  Louris and Wakefield each rushed for over 200 yards on the night, with Wakefield going for 280 yards.  Louris put up 202.  Greenville will be the #2-seed and will host Wren on November 9th.  Eastside falls to the #3-seed and will open the playoffs on the road at Daniel.

Region II-4A champion Greer had things locked up heading into week 10.  The Jackets entered Friday night 9-1 overall and 4-0 in region play.  Greer's only loss came week 0 at 5A Byrnes.  On Senior Night at Dooley Field, Greer welcomed region rival Blue Ridge (1-9, 1-3).  The Tigers grabbed a 6-0 lead when Zack Mason picked off Matthew Huff an returned it 30-yds for a score.  After that it was all Jackets however.  Dre Williams had TD runs of 3-yds, 38-yds and 62 yds in the first half.  Huff added a 31 yard TD scramble and a 9-yd TD pass to Miller DeArmond.  North-South offensive lineman Kyle Schneider scored on a 1-yd run as Greer built up a 42-6 lead at the half.  Williams opened the 3rd quarter with an 89-yd kickoff return and the Jackets cruised to a 63-6 victory.  Greer will host Pickens on November 9th to open the 4A playoffs.  The Jackets look poised to challenge for a title.  Blue Ridge finishes its first season under head coach James Thurn 1-9, with a young team that gained valuable experience in 2018.

With the Blue Ridge loss, Travelers Rest would have been in the playoffs anyways, but the Devildogs took care of business Friday night vs rival Berea.  Deonte Byrd opened the game with a pair of TD runs as the Devildogs built a 16-0 lead after one.  Byrd added his third score of the night in the 2nd and Derrick Fields hauled in a screen from Wilson Hendricks as TR blew the game open in the 2nd quarter.  With the victory, Travelers Rest moves to 7-3 on the season and will travel to Ridge View on November 9th to open playoffs.  A huge jump for a team that won only once in 2017.

Southside entered Friday night locked into the #2-seed out of Region II-3A.  The Tigers traveled to longtime rival Carolina, who hoped to steal their first victory of the season. The Tigers would have none of it as they throttled the Trojans 72-0.  Brayden Bennett has come in this season and rushed for over 1300 yards as he, along with QBs Jalon Calhoun and Jamie Gamble, have made the Tigers a juggernaut on offense who can do some damage in the playoffs.  The Tigers will host Newberry to open the playoffs on November 9th.

Wade Hampton, JL Mann and Riverside all ended their 2018 seasons with a loss.  Wade Hampton got one last rushing TD from senior Trey Berry as the Generals fell to Westside 50-7 to finish 1-9.  Mann lost to Greenwood on Thursday night and Riverside fell to region champion Dorman on Friday as both teams finished 2018 at 0-10.

Playoff matchups are tentative as the lower part of the state will finish their regular season this week after the hurricanes forced a bye week early this season.  The first round of the playoffs will be held on November 9th.