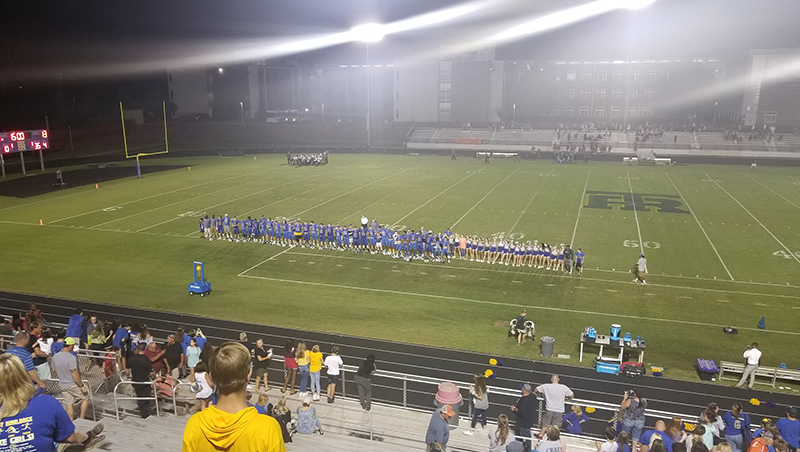 The Travelers Rest Devildogs are now 5-0 to start the season!  TR is off to its best start since 1967 and the Devildogs kept it going with a non-region home game vs longtime rival Blue Ridge (0-4).  Jake Hall got TR on the board, hauling in a TD strike from Wilson Hendricks on the opening drive.  Late in the first, the defense, which has been outstanding all season, got on the board with a safety and Hendricks capitalized on the short field when he found Esias Tucker for a 16-0 lead after one.  Blue Ridge cut into the lead midway through the 2nd quarter, but a short TD run by Deonte Byrd pushed the lead to 23-7 and Hendricks closed the half with a pair of TD strikes to Hall and Derrick Fields.  Corbin Baker added a punishing TD run and the Devildogs cruised to a 44-13 victory.  Travelers Rest will head to their bye week unbeaten as they prepare for region play.  The Devildogs will host fellow unbeaten, Eastside, on September 28th.

Broome jumped out to a 7-0 lead on Eastside, but the Eagles tied things up on the ensuing kickoff to make it 7-7 after one.  The teams went back and forth all night long.  Eastside grabbed a 10-7 lead, then Broome responded with a TD run.  The Eagles added a pair of scores, a TD and another FG to grab a 20-14 lead at the half.  The Eagles opened the 3rd with another TD, but Broome answered and at the end of three the Eagles led 27-21.  Broome grabbed the lead with 10:19 left in the game, 28-27.  Marshall Skoloff calmly lead the Eagles to their third come from behind win in the 4th quarter as he scored on a  1-yard TD run to give Eastside a 33-28 lead.  The defense closed the door on Broome and the Eagles moved to 4-0 on the season.  Eastside will travel to 3A power Chapman on Friday for their last non-region game.

Hurricane Florence forced an early game for Greenville as they traveled east toward the storm to face defending 4A state champions South Pointe.  The Red Raiders grabbed a 7-0 lead on a Colin Wakefield run, but a costly penalty allowed the Stallions to tie it at 7 in the 1st.  Greenville regained the lead in the 2nd with a trick play toss back to the QB and Davis Beville found Wakefield in the endzone and Greenville looked to be going into the half with a seven point cushion, but with only :08 seconds remaining, South Pointe snatched momentum away with a score to tie it at 14.  The back and forth continued as Greenville regained the lead in the 4th on a short run by Terrance Gist.  South Pointe tied the game and then launched a 96-yard scoring drive aided by a pair of huge runs to grab a 28-21 lead  with 1:07 to play.  With 4.6 seconds on the clock, Greenville lined up at the 7-yard line for their final play.  Beville rolled right and found an open receiver at the pylon to make it 28-27.  Greenville tried a trick play for two, but Beville bobbled the snap and the Raiders fall to 3-2 on the season, but gained valuable experience heading into region play.  The Red Raiders will be on a bye this week and will host region power Greer on September 28th.

The Yellow Jackets have been rolling since a week 0 loss at Byrnes.  Greer has taken down 5A playoff teams in Spartanburg, Westside and Mauldin the last three weeks.  On Thursday Greer hosted the annual Jacket Bowl with Union County.  Trevion Houston opened 5-for-5 and hit Cameron Martin for a 17-yd TD to put Greer up 7-0.  Union County answered with a big play, a 68-yd TD to tie it at seven.  Greer regained the lead on a 25-yd scramble by Houston to take a 14-7 lead after one.  on 4th and 4, Matthew Huff hit Braxton Collins for 31 yards.  Huff, in for Houston, then found Collins for 28 yds and a 28-7 lead.  Dre Williams added a score to make it 35-7 at the half.  Huff hit Miller DeArmond in the 4th and Greer moved to 4-1 on the season with a 42-7 win over Union County.  The Jackets will be on a bye before traveling to Greenville to start region play.

The last member of Region II-AAAA, Berea, traveled to Pickens Thursday night.  The Blue Flame, coming off a disappointing one point loss to TR last week had their run game cranked up hosting the Bulldogs.  Pickens raced out to a 38-7 lead at the half and cruised to a 44-13 victory.  Berea has one more non-region tune-up as they host former region rival Southside.

Carolina (0-4) is still looking for their first win in over two years.  The Trojans are playing better and starting to put points on the board, but on the road at Liberty, Carolina fell 38-28.  The Trojans (0-5) will travel to Walhalla on Friday before heading to their bye week.

In Class 5A, region play has started for all GCS teams.  Hillcrest (3-0) opened with a huge region matchup at Dorman (3-0).  Both teams entered ranked in the top 10 in the state in Class AAAAA.  It was a defensive struggle early as the Rams and Cavaliers played to a 0-0 tie after one.  AJ Hampton had a big interception to spoil a Dorman drive  as the Rams defense was solid early after starting slow a week ago.  The Cavaliers struck first in the 2nd with a 1-yd TD run to grab a 7-0 lead.  Following a 15-yd holding penalty that set Hillcrest back, WIll Watts connected with Quen Jefferson for 87 yards to tie the game.  The Rams special teams came up big as Aries Scott blocked a punt and Aces Scott recovered the loose ball.  Quen Jefferson put the Rams up 13-7 with a 20-yd TD run.  Dorman regained the lead 14-13 and then extended it to 21-13 right before the half with a pair of TD runs.  Nobody was able to find the endzone in the 3rd as both defenses settled in and took control of the game.  In the 4th, the Rams were able to mount a long drive and Collin Whitfield barrelled through the Cavalier defense for the score.  Jefferson added the 2-pt conversion and the game was tied at 21 with 9:07 to play.  Dorman mounted a drive and when the Rams blitzed to stop the Cavs run game, Dorman went over the top for the game winning score.  Hillcrest falls to 3-1.  It was Hillcrest's first road region loss since 2014 according to Rams radio analyst Jeff Schmauch.  The Rams will host Spartanburg next Friday.

Also in Region II-AAAAA, Mauldin traveled to undefeated Gaffney.  The Indians have only allowed 73 total yards of offense on the season as they cruised to a 3-0 start.  The Mavs were coming off a poor offensive performance against Greer last Friday.  The Indians grabbed a 6-0 lead on a short TD run by Quez Smith.  Mauldin's offense was able to move the ball on Gaffney, but turnovers and unforced penalties set the Mavericks back time and again.  Mauldin threw two first half interceptions, but the Mavs defense held fairly firm in limiting the damage.  A busted coverage lead to another Indians TD, a 35 yard pass, but the Mavs still only trailed 12-0 after the failed 2-pt try.  Mauldin was able to get on the board with a 31-yd FG by Aldemar Jimenez.  After a defensive stop, the Mavs were driving again but stalled out and gave the Indians good field position just across midfield.  One play, 56 yards and Gaffney lead 18-3 at the half.  The Indians would add a FG and a TD in the 2nd half to push the lead to 27-3.  Joe Owens came in late at QB and found Cam Jackson for a 13 yard score.  Mauldin recovered the onside kick, but stalled out on downs and Gaffney won 27-9.  Mauldin falls to 1-3 on the season and will host Riverside on Friday.

The Warriors fell to 0-4 on the season as they were shutout at home against Boiling Springs 51-0.

Over in Region I-AAAAA, Greenwood was an early favorite to contend with TL Hanna for the region crown.  Woodmont was off to an 0-3 start and hosted the Eagles on Thursday night.  The Wildcats battled all night.  Woodmont's option rushing attack kept Greenwood off balance and the Wildcat defense played their best game of the season.  Greenwood was kept out of the endzone, but managed to connect on three field goal attempts.  Unfortunately, Woodmont was unable to find the endzone and fell 9-0.  The Wildcats will look to build on their solid defensive performance as they host Wade Hampton on Friday night.

The Generals are also off to an 0-3 start and traveled to Laurens (1-2) for their first region tilt.  The Raiders struck first and often in the first quarter, racing out to a 21-0 lead.  The defense settled down a little in the 2nd, but Wade Hampton wasn't able to muster any scoring drives and fell behind 28-0.  Jesse Klein broke the scoreless drought with a 43-yd FG and Hagen Hiott added a TD toss, but Wade Hampton fell to 0-4 with a 35-10 loss.

JL Mann had to open region play vs upstate power and region favorite TL Hanna, who is off to a 3-0 start.  The Jackets jumped out to a 21-0 lead after one and lead 45-0 at the half.  Mann scored 20 in the second half, but fell 65-20.  The Patriots will host Easley next Friday.